Kinkaku_ji and Ginkaku-ji By Daisuke Nakayama 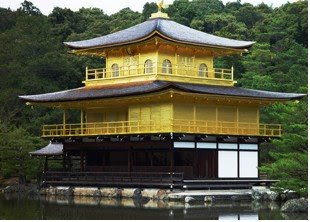 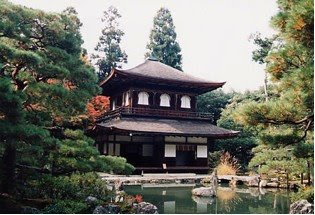 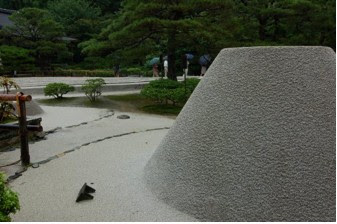 When I was thinking about a topic of this term paper, soon one thing came up in my mind. What was it? It was a Japanese temple or shrine, but why did it come up in my mind? I think that the reason came from my grandfather’s job. My grandfather, although he already passed away about three years ago, was a Japanese traditional carpenter called miyadaiku. Miyadaiku, according to Japanese dictionaries, are carpenters who specialize in the construction of shrines and temples. Such construction, however, does not involve the use of steel or concrete, the materials often used in modern architecture. Miyadaiku works only with wood. Today, they work almost exclusively on ancient cultural properties, such as the Horyuji Temple in Ikaruga Town, Nara Prefecture, the oldest extant wooden structure in the world. When such centuries-old buildings require restoration or dismantling for repairs, miyadaiku are called upon. The Kansai region has a wealth of wooden structures recognized as cultural assets, so naturally many miyadaiku can be found there.

Horyuji was built in the early seventh century. The traditional skills that went into building this structure has withstood the elements for over 1,300 years, and the skill is still kept alive today by the craftsmen from (Kansai Council (KC) and Kansai International Public Relations Promotion Office (KIPPO)). When I was little, even a junior high school student, I did not know my grandfather’s job was wonderful and artistic. I gradually came to understand what his job was, how difficult it is to get a lot of skills for it, and above all, how important his job is for Japanese culture. So I would like to focus the resarch on Kinkaku-ji and Ginkaku-ji for this term paper. When I was in junior high school, my history teacher said , “Kinkaku-ji actually has gold on its wall so it is called Kinkaku-ji. However, in terms of art, Ginkaku-ji that does not have silver at all is better than Ginkaku-ji.” Even now I strongly remember what he said; therefore, I would like to focus on the methodology of their constructions, especially the procedures of gilding the wall of Kinkaku-ji, and the esthetics of Ginkaku-ji.

First of all, if you have been to Kyoto prefecture in Japan, I think that you would go to see Kinkaku-ji. Those people visiting Kinkaku-ji will be impressed by its real golden wall, so what comes to their eyes at first is obviously the golden wall. But I think that many of them do not know how high techniques were used on the wall and how much efforts were put on it by those people having a traditional skill like miyadaiku. Kinkaku-ji (picture # 1) also calld Golden Pavilion in English, is a Zen temple whose official name is Rokuin-ji. Kinkaku-ji was built by Ashikaga Yoshimitsu during Muromachi Period in Japan and started its construction in 1397 as his new house after he retired. Then kinnaku-ji became a Zen temple after Yoshimitsu died in 1408. The present Kinkak- ji was rebuilt in 1955 because the original one was set fire and burnt by a crazy monk in 1950 (Schauwecker).

The repairing of Kinkaku-ji was carried by YAGUCHI KOETSUAN, a company in Kyoto Prefecture working for conservation and repair of hyogu (表具), such as including kakejiku, makimono, and byoubu. In 1987, they repaired the gilding of Kinkaku-ji, but it was so difficult even for them. In order to fix the gilding, at first they had to find out what caused the gilding felt off the wall. The answer was the ultraviolet radiation. Lacquer was used as a joining material when gilding on wood. After coating a surface of wood with lacquer, they gilded the surface. However, the problem was that lacquer was too weak to resist the ultraviolet radiation. Because gilding is very thin and there are many tiny holes which are hard to be found. Since Kinkaku-ji was rebuilt, through those tiny holes of the gilding, ultraviolet radiation had damaged its lacquer. As a result, the gilding of Kinkaku-ji peeled off from the wall as lacquer lost its function as a joining material because of the damage. They needed to solve the problem, and they though about using more thick gilding. As they researched the past of Kinkaku-ji, they found evidences showing that old miyadaiku had used more thick gilding than gilding at that time. Because they wanted to make the same Kinkaku-ji as much as close to the original one, they decided very thick gilding called gobaihaku (五倍泊). Gobai means “quintuple” in English, so they used five times thicker gilding than usual gilding to repair the gilding of Kinkaku-ji. However, they faced a new problem again at this point. Since they tried to use gobaihaku, normal lacquer could not keep it on the wall because of its weight. They started to find a new lacquer and finally found the best lacquer that could endure the weight of gabaihaku. The lacquer was made in Iwate Prefecture, and it was called Joubouji Urushi(浄法寺漆). Urushi means lacquer in English Joubouji Urushi has been famous for its high quality lacquer since Edo period in Japan, and even now it is used to repair national treasures and important cultural assets. One and half tons Jouboujiurushi was used for the repairing of Kinkaku-ji (IWATE NIPPO CO.,LTD), and they carried out more than sixty processes to just coat the surface of woods with it. After that, they gilded the surface by gobaihaku, and finally Kinkaku-ji recovered the original brightness (Kosetsuan Inc.).

On the other hand, Ginkaku-ji is not gorgeous like Kinkaku-ji, and silver is not used at all. Why is it called Ginkaku-ji? I think that many people, even Japanese people, have the same question. In fact, until my history teacher told me that story, I have never thought about the fact that there is no silver on the wall of Ginkakuji. Ginkaku-ji (picture # 2), also called Silver Pavilion in English is built by Yoshimitsu’s grandson in 1482 as his retirement house. The temple’s official name is Tozan Jishoji. Although he intended to use silver on the wall of his retirement house as well as his grandfather’s Kinkaku-ji, he focused on the implication of Zen. Hence, he left a simple and modest style in his retirement house. Ginkaku-ji is a two storied structure. He did (Zazen) meditation at the lower floor, the Soul Empting Hall, Shinko-den. There are bell shaped windows of the upper floor, and the upper floor includes the image of Kannon, the Biddhist goddnes of mercy. It is said that Yoshimasa have watched the moon rising over the hills from the balcony on the upper floor (Holborn 51-52). As you can imagine the moment by closing your eyes, and I think it was so beautiful a moment.

Holborn, the author of “The Ocean in the Sun” says, “Kinkakuji and Ginkakuji stand like sun and moon. The Silver Pavilion, smaller and simpler than its golden counterpart, is surrounded by lunar images. It is extraordinary to imagine a garden recorded through history in terms of its beauty by night.” I strongly agree with that, and I think that the view from the inside of Ginkaku-ji is so beautiful when it is in the night of full moon. So the answer why Ginkak-ji is called like that is the reflection of moon light. Moon light reflects on the beautiful white sand in front of Ginkaku-ji, and the light comes into inside. The beauty of Ginkaku-ji is made by nature and silent, and I think that it expresses Zen.

However, in today’s garden of Ginkaku-ji you can see two clear features. Ginkakuji was reconstructed in the early seventeenth century, and from that date, a corn of white sand with flat top about six feet high, stands in front of Ginkaku-ji, beside the lake. It looks like the image of a volcano rather than a mountain, and it is called Kogetudai (picture # 3), the Moon Facing Height. Also, next to the cone is a raised pile of white sand about two feet high and its perimeter is irregularly shaped. The surface of the sand looks like the image of wave, and it is called Ginshandan (picture # 4), the Sea of Silver Sand. Although Yoshimasa did not plan the sand features, references to a sea of silver sand were made before the reconstruction of Ginkaku-ji(Ruck 147-148).

Although some people might say that these sand heaps are inharmonious with the garden, I do not think so. I think that these two features on the garden of Kinkaku-ji have the certain beauty of their own. Ginkaku-ji does not look like gorgeous Kinkaku-ji, but it has actual “silver,” which is generated from moon light and white sand. You can imagine it again. You are in a simple and small room made by woods when it is full moon. There is no light except for moon light. You can not listen to anything except for natural voice like wind. Then the only thing you can see from the inside is a sea of silver sand reflecting moon light. It is so beautiful and fantastic.

Kinkaku-ji and Ginkaku-ji sound like the same thing, but both have their own beauty. As you see, Kinkaku-ji is so beautiful and gorgeous, and the beauty is from a wonderful skill which had been handed down to masters to their disciples for a long time. I think that these traditional skills should be handed down to protect Japanese culture, and we should not forget those people who contributed their efforts to the reconstructions and preservations. I prefer the art of simplicity and calmness, and I know how difficult it is to create this type of art and beauty. Finally I am proud of my grandfather and I am glad to understand how wonderful his job was.