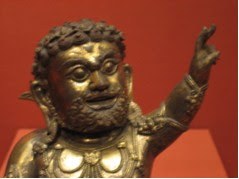 Golden Gladness
It was evening when I arrived at Asian Art Museum in San Francisco. Unfortunately it was cloudy. However, as soon as the golden shining statue was caught by my eyes, I found bright sensation in that object not only because of that object covered with gilt but also because his healthful grand expression and gesture. He sits with raising his knee and raising his left arm gently. There is no stress I could see from this object. His face is full of peace. In addition to those features, my memory helps my thought, “this person must be drinking.”

The golden wine-bottle-size figure was found at Beijing, China. It is said the shining object was made around 1400 to 1450. The period corresponds to the middle of Ming dynasty (1368 to 1644). It is titled “The Great mystic Virupa”. It is made from gilt bronze, so it is shining.

According to T. T. Moh, a member of America-Tibet Association, in Ming dynasty, there was a continuous influence of Tibetan Buddhism from Yuan dynasty. This golden object is an evidence of that influence. Therefore historically this figure is telling that there are certain influences of Yuan dynasty in early Ming dynasty.

Although the figure has an eye-attractive appearance, the story behind the object simultaneously magnetizes visitors. Virupa, the name of figure, is counted as one of the eighty-four mahasiddhas. Mahasiddhas means experts of Vajrayana Buddhism. The description of this item says that he used to hold a skull bowl in his right hand, and he pointed the sun with his left hand. The story tells that one day Virupa came to a town called Varanasi. He demanded to attract people’s attentions, and he decided to drink at party of local bar. He said he would pay his bill at sunset. Then, he stopped the sun by his mystic power. Since the sun continuously heats up the surface of the earth, and the temperature became extraordinary high. At last the local king paid for him to stop using mystic power.

When I read this story, I was surprised how precisely this figure shows the details of drunker. His face is full of piece. He succeeds to attract human eyes. His thought is irrational and seems not fit to the religious thoughts. However, according to Peter Della Santina, the fellow at the Indian Institute of Advanced Study, Shimla, there are three important stories of Virupa. The first story is that he stopped the stream of the Ganges River in order to cross it. The next is that he continued to drink wine for all three days without rest. The final story is that he stopped the movement of the sun. Therefore, the story of this golden figure is combination of last two of three. For me those stories were not what adept of Buddhism. Yet, those stories contain certain teaching of Buddhism. Peter Della Sanitina also mentioned those hidden meaning of three stories. By his explanation, stopping the flow of the Ganges River means stopping the flow of life and death. It might be Nirvana. Three days long drinking wine demonstrates “enjoying the supreme bliss of emancipation”. Finally stopping the sun in the sky shows “holding the light of the mind in the sky of omniscience”.

Those ideas are not what I expected at all. The illogical miracles reveal just ideal of Buddhism in casual ways. He is certainly an adept of Vajrayana Buddhism since he just showed me what Buddha’s teaching is. In addition to this miracle stories, he was teaching Buddhism at Nalanda University, and he himself was earnest believer. Though he had practiced for a long time, he never got success. At last, he gave up those practices, and the next night he dreamed Nairatmya, a goddess of insubstantiality. She pointed out his mistake of reciting mantra. Then, the next day he finally got success. After great pain, he achieved respectful success with help or lead of goddess. It is for me “Gods never abandoned the person who makes great efforts.”

His miracles were condensed in small hand size golden object. The facial expression surely demonstrates incredible happiness, and his posture means existence of knowledge. This masterpiece has great teaching behind his drinking. Now I am wondering my friends who love drinking are approaching their own enlightenments.