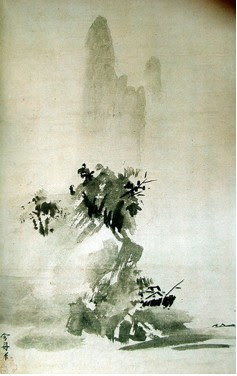 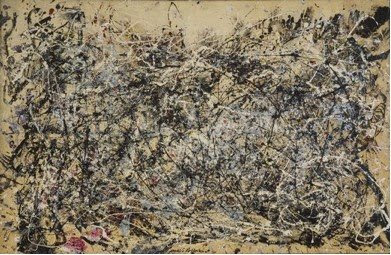 During the Tang Dynasty, paintings influenced by Ch’an Buddhism and Tao and Confucian philosophies were expressionistic, intuitive, and abstracted. Later Japanese works from the fifteenth century followed the same stylistic direction. Finally, in the mid twentieth century, Pollock’s late, iconic work again repeated the ideals of spontaneity, in the style of Abstract Expressionism.

Ch’an Buddhism remerged in China after surviving the persecution of 845 during the late Tang dynasty . Its founder, Indian monk Bodhidharma arrived in China around 520 AD. After an unsuccessful audience with emperor Wu-ti of the Liang dynasty, Bodhidarma began a nine year meditation at the Shao-lin Temple on Mount Sung. The term Ch’an is derived from the Sanskrit word for meditation, dhyana . Bodhidharma’s sect of Buddhism drew on the Taoist belief in subitism; that understanding cannot be expressed in words, only transmitted from mind to mind. Followers do not use scripture or institutionalized worship, but follow an intuitional path of self-discovery . The T’ien-t’ai sect of Buddhism was influential to Ch’an ideas that Buddha can be found in all things and even menial tasks can lead to enlightenment . Ch’an Buddhism gained popularity during the Song dynasty as its principles complement those of Neo-Confucianism and Taoist philosophy, also popular at the time. Chinese essayist Su Shih (1037-1101) said “Tao can be made to come, but cannot be sought,” suggesting an intuitive approach to religion, writing, and art . The three philosophies fit so well, in fact that by the twelfth and thirteenth centuries, they had formed an integrated religious system known as Three Religions in One. The influences of these three teachings would become inseparable in Chinese culture and art from this point on .

The influence of the Three Religions in One on art was the idea of intuitive and expressive motions. The artist’s personality was paramount in paintings. Bold, simplified brushstrokes upon sparse canvases create a sense of calm and an unplanned, natural approach to composition. Common subjects for paintings of this style were living lohans: Taoist immortals and miracle workers roaming the world disguised as beggars , the meeting of the leaders of the Three Religions, and traditional landscapes depicted in a new, minimalist way with forms abstracted and composed of as few strokes as it seems possible. This style is often called the spontaneous mode because of its emphasis on automatic processes. Although accepted during its time, it later fell out of popularity and only survived to today because of the Zen circles in Japan that treasured and collected the art. Some of the most famous painters of the style are Lianh Kai and Mu Qi. Buddhist monk Yu-Jian used a “splashed ink” technique that exemplified the radical nature of this style of painting . His work Mountain Village in Clearing Mist (Fig. 1) is a highly abstracted hand scroll done with ink on paper. The mountainous bodies consist of boldly expressive strokes of varying tones of black ink. Yu-Jian’s techniques later influenced Japanese artists during the fifteenth century. They termed their work hatsuboku painting. Its most famous and copied artist is Sesshu Toyo (1420-1506) whose Hatsuboku Landscape for Soen (Fig. 2) slight tonal differences and sharp, violent edges make it emotionally impactful as well as aesthetically beautiful.

Across the globe and over six centuries later, Jackson Pollock was a New York artist struggling to find his own style and technique. The western tradition in art of figural, representative paintings had lost its stronghold in the last century, but still restricted the definition of art. Europeans artists such as Picasso, Mondrian, Duchamp and Van Gogh were exploring cubism, surrealism, and expressionism. Pollock, an educated artist, knew these influences, but probably not the Chinese and Japanese Three Religions-influenced art. Along with other New York artists of the time, Pollock began working in a new style coined Abstract Expressionism . This type of painting is automatic, process-oriented, non-representative and extremely non-traditional. Pollock’s early work was abstract with a muddied, dark palette and highly expressive strokes and twisting, jumbled geometric forms. His mature style, and the one he is best know for is a “drip” method in which he dips his brush in globs of enamel house paint and swirls the dripping trail of paint onto a canvas spread on the floor . This work is purely gestural, with a non-hierarchical composition of absolute chaos. Technique has become the subject of the painting, rather than any physical form. By dripping spontaneously, Jackson captures his emotions and actions and their physical embodiment becomes the subject of the painting .

The Three Religions in One-influenced art of China and Japan share remarkable similarities to Abstract Expressionistic work in both intention and execution. Both forms of art use gestural manipulations of the medium (paint or ink) to showcase technique and process. Both departed drastically from the mainstream styles that were predominantly figurative and abstracted their subject matter, and in Pollock’s case, removed subject matter altogether. Yu-Jian’s Mountain Village in Clearing Mist (Fig. 1) utilizes tonalities of black ink to create depth and the illusion of a landscape, although not a literal interpretation of one. Under the influence of Ch’an Buddhism, there is an emphasis on spontaneity reflected in the lively, quick strokes. Pollock’s Number 1A (Fig. 3) also showcases an automatic technique obvious upon viewing. Instead of tonalities of ink, Pollock utilizes a dark palette of enamel house paints dominated by black, white and light blue with splashes of bright red and a myriad of other colors. Both works utilize unique techniques that become a dominant part of the paintings meaning and purpose.

The expressionistic quality of Pollock’s, Yu-Jian’s and Sesshu Toyo’s works unites them and makes them stand out among the work of respective contemporary artists. The strong gestural marks in each of these artists’ works show the mood of the artist and their own personal view of the world around them. Yu-Jian and Toyo draw from the Ch’an use of natural intuition to allow themselves to spontaneously paint, following the path only they can find. Pollock, with different inspiration, desired the same automatic art. He was trying to free himself from subject and figure and bring his own personality to the foreground.

Western art’s longtime fixation with the representative and calculated contrasts greatly with Eastern art’s, especially Chinese, preference for the interpretative. As Jing Hao said in 880 AD, “the art of the painter lays in grasping the ultimate reality and not the mere illusion of reality; in abstracting the spirit from the form...obtaining the outward appearance will produce a dead thing.” This cultural difference helps to explain why Expressionism was considered a new and radical art form in 1950’s America, yet was practiced in thirteenth century China. The fact that the paintings were not long-lasting in China and only survived in the hands of Japanese collectors also contributed to its lack of visibility in the Western world. Ultimately, though it is a difference in culturally-influenced taste that caused such a gap in artistic discovery.

The abstracted qualities all of the afore-mentioned works drew from past influences, yet went beyond the established to unexplored territory. Yu-Jian’s forms were influenced by the art of calligraphy in China. The strokes of calligraphic writing had been applied to painting long before Yu-Jian’s time and indeed his medium reflects this. The manipulation of the ink shows a definite, firm, practiced stroke. Yu-Jian’s work goes further than earlier works that would use sparse wild stroke amongst finer, planned detail works. For the most part, Yu-Jian abandons fine details and uses highly expressive, abstract strokes to barely suggest a landscape form. Each stroke is unique, yet together they form a moving and vaguely representative whole. Pollock’s earlier work retains formal components, but Number 1A (Fig. 3) has absolutely no recognizable form. The abstraction is absolute and the application has become the subject of the work. While obviously more extreme than his Easter counterparts, Pollock nevertheless used a similar technique of bold abstraction.

The parallels between the Spontaneous works and Pollock’s Abstract Expressionist paintings are numerous. It shows that even cultures and individuals separated by distance, time and cultural differences can resemble each other in remarkable ways.