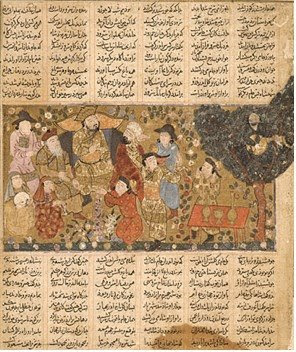 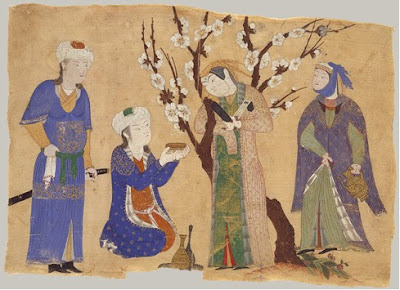 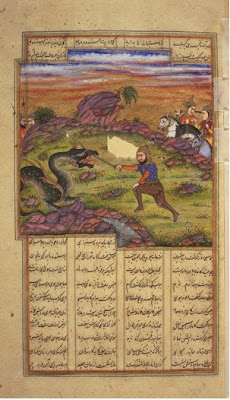 How the Invasion of the Mongols Shaped Persian Art

When I was a little girl growing up in Tehran, Iran, the world seemed very small to me, as I’m sure it does for every child. Life revolved around the city, the family, and the mosque. As I grew older, of course, the world became larger. News that I previously did not really understand would become clearer. Conversations about politics would make sense. Finally, things that never connected with one another began to connect. One of these connections came from contact with my grandfather, who was a highly traveled man, having spent much time in Eastern Asia. When I would look through his collection of books from China, I began to notice strange similarities between older Chinese art of and more recent Persian art. The colors were similar; the light blue ornamentation used in both cultures was almost exactly the same. The tiles that covered the inside of my mosque were nearly identical to those that I saw decorating Chinese palaces. More and more, I began to make connections between the Asian world and my world.

I realize now that all of these similarities were not coincidences, were the result of cause and effect. The cause was Asian and Chinese intrusion into the region in the Middle Ages, and the effect was a very different form of art. The following paper, then, will discuss the three main ways that Persian art was altered by East Asian art: the more Asian depiction of the subjects; the inclusion of nature; and the inclusion of the Asian supernatural. This will be done with three Persian artworks of that period, and a single, typical Chinese piece of the same period. The similarities are truly astounding.

It is quite obvious from a single look how similar Persian art is to East Asian art forms, and it is interesting how the similarities developed. The influence came by way of the Mongol invasions of the 13th century, and were consistent through the Timurid Dynasty, a Turko-Mongol tribe that took over almost all of Central Asia, Iran, and Iraq at the beginning of the 15th century. This Asian culture, lasting over 400 years, provided more than enough time to establish a strong and deep influence within the region. In this time, the Mongols brought hundreds of Chinese painters from their native land into the Persian courts as artistic recorders of the royalty housed there. The new Sultans patronized these artists, and essentially created a new Persian culture with much Eastern influence. The culture of the Mongols found its way into nearly every artistic art form in the area, and the influence grew apparent in painting, coloring, tile work, and even architecture. The very presence of the Mongolian rulers and their artists was enough to shape the Persian artistic landscape for the next six hundred years.

As wide-reaching as the Eastern influence was, though, there were some parts of Persian art that it impacted more than others. For instance, the presence of the Mongols was not enough to eliminate the presence of Islam in the artworks. On the other hand, though, some dimensions of the art were, in fact, impacted. To repeat, the strongest influences were in the depictions of the subjects; the inclusion of the natural in art; and the inclusion of the supernatural in art.

ii. Individuals in the Works

Possibly the most striking characteristic of post-Mongol Persian art is the appearance of the individuals within the works themselves. Prior to this period, the Sultans, royalty, and other subjects of artwork had, to put it simply, a Middle-Eastern appearance. But even at the beginning of the Eastern period, when the concept of the “miniature” became incredibly popular as a method of book illustration, the subjects of the pieces began to take on an appearance more characteristic of the Southern Song Dynasty in China rather than the Middle Eastern period.

For instance, even a quick glance at King Khusraw Parviz Listening to Barbad the Concealed Musician (figure 1), a illustrated miniature from the Book of Kings, makes one feel like she was in Beijing, not in Baghdad. King Khusraw is, as mentioned, a miniature that was an illustration in a book. That, of course, accounts for the Persian calligraphy that surrounds the piece, as well as its medium and size. It is made from ink, opaque watercolor, and gold on paper, and is approximately 6 by 5 inches. It is a lovely scene of a stringed instrument-player serenading the king who sits below with his entourage.

The interesting part of this piece is the fusion of Middle Eastern and Eastern culture in the subjects depicted. One of the king’s attendants is wearing a turban, but he is also wearing a Chinese robe. The women also wear Chinese robes and sashes, and their hair is done in a way that is certainly not – and never was – Middle Eastern. Most striking about the piece is that while the faces and beards are of Middle Eastern appearance, the eyes are particularly East Asian.

This entire scene actually looks quite a bit like Chinese many depictions from the same period. If you compare it to Sixth King of Hell: Bianchengwang (figure 2), the two share so much in common that you would think that they could have come from the same painter. The mediums and sizes, of course, are different. Sixth King of Hell is huge when compared to the miniature, standing 42 by 19 inches, and made in ink, color, and gold on silk. The piece is also different in subject matter, with individuals in various stages of pain standing in front of a sort of nature-scape. Outside of these differences, though, the appearance of those within the pieces are strikingly similar: the faces, the dress, and the hair. It is clearly an Asian piece. Oddly, though, it is not much more Asian in those respects than King Khusraw.

An additional factor similar to both pieces is the incorporation of nature into the works. This is what we will now speak about

iii. The Influence of Nature

Maybe the intriguing aspect of painting that the Mongols brought to the Middle East was a great attention to detail In any given Asian painting, what is not the center of attention is almost as important as what is the center of attention. The borders, backgrounds, and extra ornamentation are nearly as important as what is in the middle of the artwork. Even more typical of Asian art is the inclusion of nature in the work – not merely as a decoration, but as a “detail” that helps to bring the entire work together. A Princely Couple with Attendants (figure 3) displays this beautifully.

The piece is 8 ½ by 18 inches, and the medium is colors (unspecified) and gold on silk. The subjects of the painting are obviously of royal descent, and the prince smiles on the two women attending to his princess.

There are a few parts of this painting, though, that give the piece a distinctively Chinese feel. Obviously, the facial characteristics are truly East Asian. In fact, they have an even more Asian appearance than those we saw in King Khusraw. Even more, though, the decoration appearing within the painting is of clear Chinese influence. Although the subject of the painting is truly the couple, what stands behind the couple is what makes the piece so beautiful: a flowered tree blooming with either peony or lotus blossoms. These flowers, both of which are prevalent in Chinese art, turn the “depiction of a scene” into a true work of art. They add a significant element of natural beauty.

It is no coincidence, of course, that we saw the elements of the blossom and the tree in both King Khusraw and Sixth King of Hell. The first of these two has blossoms littering the floor around King Khusraw as he listens to the musician. With the second, a lotus tree appears in the background. Even in hell, it seems, art contains nature.

The best example that can be found of this introduction of the “supernatural” came through the illustrations pertaining to the stories of Bahram Gur and his various victories from The Book of Kings. Most obvious among these was Bahram Gur’s Battle with the Dragon (figure 5) by Tabriz, one of the most famous of the miniature painters from the 14th century. An inset piece of ink on paper, this piece jumps off the calligraphy-filled page, causing one to think of heroism from another world. The introduction of this strange animal into the artwork brings something that one can hardly imagine into living color. Readers of The Book of Kings must have been truly shocked by what lay between the covers in terms of art. Furthermore, they must have been amazed at the characters that they found. The dragon, a figure taken from so much Chinese mythology and folklore, must have seemed especially “otherworldly.”

Again, a very good example of this “otherworldly” type of nature can be found in Sixth King of Hell. And although there are no dragons in the piece, there is no shortage of strange figures. From horned semi-humans at the right-hand corner of the piece, to odd goat-creatures in the middle, to huddled starving children in the lower left-hand corner, the image that one receives is disturbing. Is essence, though, it is very similar to the piece in The Book of Kings: Strange, hybrid-type creatures that have never been seen are used to bring a particular emotion to the mind in a truly strong way. In The Book of Kings, the slaying of a dragon is used to convey heroism and optimism. In Sixth King of Hell, similarly strange creatures are used to promote fear and discomfort.

As I mentioned, the invasion of the Mongols was not an event that stripped Islamic, Middle Eastern, and Persian art of its soul. It did not, of course, remove the veneration of Mohammed, and Islam was still a significant part of the artwork. However, it is inaccurate to say that the Mongols and the Chinese artists that accompanied them did not alter Persian art to a significant degree.

I do not have any of my grandfather’s books from China, but I am interested in seeing them when I return to Tehran. Even more, I am interested in seeing art in my home country again. Will I see Chinese faces where I didn’t see them before? Will I see both the natural world and the supernatural world? Maybe I will. Even if I do not, though, I doubt that I will ever see one of the pieces again without looking for those aspects.