From West to East: Landscapes --by Sean Wihera 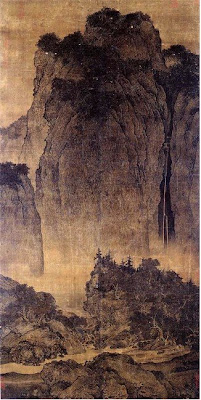 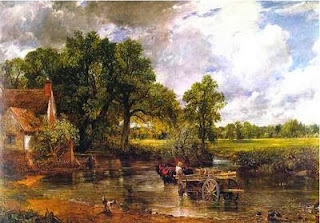 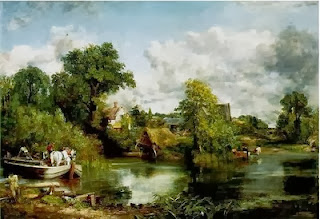 
Landscapes are our depictions of the world around us as we see, or choose to see what is before us. The stylistic differences in the portrayals of landscapes amongst artists is naturally varying according to time periods and geographic locals. This essay shall analyze the similarities and differences of two landscapes from two geographic extremes and greatly different cultures; “The Haywain” by John Constable and “Travelers Amid Mountains and Streams” by Fan Kuan. While stylistically different, there remains an enormous number of discreet similarities to be developed, but before one can analyze the details one must understand the basic differences.

Understandably, an English painter from the 19th century has an exceptionally different style from that of a Chinese painter of the 11th century. The most notable difference between the two paintings is their medium. The Haywain is an oil on canvas piece, with a gentle bumpiness too it, but not as thick as it may appear. Having seen this piece at National Gallery in London, it’s surprising how flat the oil is applied. However, oil on canvas will never meet the smoothness of a silk medium. The work of Fan Kuan is very flat in texture, as it quite literally black ink stains painted onto the silk. The textures of the medium in each work greatly contrast against the style in which each piece is painted.

Fan Kuan embraces rigid shapes and lines to form the various objects throughout the painting. The brush strokes can easily be described as “sharp”, and the rocks “crystalline” with their rigid appearance (as stated by A History of Far Eastern Art, Sherman E. Lee), in a style that Fan Kuan is well known for. Using this harsh technique of unsubtle shapes and limited color, Fan Kuan accentuates the grand feeling of the mountains and forests presented in this work. In comparison, John Constable paints with a lush number of colors. With very few actual lines painted, Constable takes a softer approach differentiating objects and depth by color, not lines. Constable’s humble scene is farther softened by his understanding and use of a realistic lighting, using shadows and light to assist in the development of depth throughout the painting. Culturally, the Chinese were known to prefer a uniform source of light cast amongst a painting. While it may appear Fan Kuan used extensive amounts of shadow in his landscape, on further observation one can see that Fan Kuan used shading not as shadows, but as a method of developing depth and shape through texture and distance with his limited colors. The depth of each painting is perceived differently however according to the artists use of perspective.

Both John Constable and Fan Kuan use a perspective that is exceptionally representative of their culture and time period. Fan Kuan uses a simple geometric planar style perspective common of Chinese landscapes. This perspective allows the observer full view of all the presented material, while unrealistic of human perception this perspective is a good example of the values, which the Chinese art culture emphasizes. The perspective is similar to flattening a sphere into two dimensions and then observing the resulting circle. There is a feeling of depth offered by the planar division within Fan Kuan’s work. Separating Fan Kuan’s work into 3 planes; the foreground, middle, and background by the mist and stream offers an exceptionally simplistic geometric design. As simple as this perspective may be, it’s an ingenious method of offering a developed sense of depth considering the limited number of colors and restrictive sense of lighting. In contrast to this characteristically simple Chinese landscape perspective, John Constable uses a far more modern perspective. Similar to the view of human eyesight, Constable’s painting offers a constant sense of depth unto the horizon of the painting with numerous uses of shadows and color to assist in the establishment of depth. Constable would often establish his chosen perspective through a variety of practice sketches of a geometric nature (According to National Gallery London- Great Museums of the World). Only after establishing his perspectives would Constable begin with his palette knife and brush. With his established constant perspective, Constable would then paint the detailed and impressive colors his landscapes were known for.

From my personal observations I have noticed that many of Constable’s works also often contain a rough line of symmetry either along the horizontal or vertical axis of the painting. In “The Haywain” one can see a sort of rough symmetry; light reflected from the water with the sky, as well as the dark ground before the house with the dark forest thicket. Another good example of Constable’s purposed symmetry would be his work “Ferry and a White Horse”. While this line is certainly no mirror image, the colors are often more than merely reflections off a source of water, but the colors are balanced with light and dark over this line. Beyond the physical depictions, the potential emotional and spiritual aspects in art are some of the most important parts of a work.

Both Fan Kuan and John Constable offer the emotions a huge amount of material to consider. Beginning with Fan Kuan’s work, one sees majestic mountains towering over a small town or temple. In Kuan’s work the mountains are separated from the forest and temples by a layer of fog. Fog is often representative of the unknown or mystery, while mountains are remains a symbol of the heavens in many cultures. Under this logic one could say that the fog not only separates the geometric planes of the painting, but also suggests that the unknown separates earth from the heavens. Fan Kuan’s work is of a landscape of epic proportions, leaving the manmade temples miniature in comparison to the natural wonders of the earth. Fan Kuan’s horses and man are also dwarfed by the trees, more so suggesting that man is insignificant in contrast to nature. Constable’s work in comparison offer a far more humble landscape of far smaller proportions. The men in this picture are far more apparent, and the house has a definite impact on the scene. While in Constable’s painting nature is beautiful, it’s not impressed as powerful or dominating. Constable’s painting offers a relatively comforting image to the mind of most native English. Constable’s work also expresses a very significant religious theme; we see the two men and horse journeying towards the dark wood with the luminous clouds above. The “dark wood” or forest is often reference to a life of sins and is a common theme in Christian religious art, and from classical texts such as Dante Alighieri’s Divine Comedy;

“When I had journeyed half our life’s way,
I found myself within a shadowed forest,
For I had lost the path that does not stray.”
(I.i.1-3 : Inferno)

This work of Constable, while most certainly known to be a landscape, may have also been intended as a suggestion of religious reverence on the artist’s part. Coincidentally, Fan Kuan’s work displays a man and his horses leaving a dark forest, although it’s unlikely that there was any parallel religious symbolism.

Personally, I find “The Haywain” offers an exceptionally pleasant scene; the fields are warming and arouse feelings of happiness, while acknowledging not all of life is warm and beautiful with the water beneath the shadows. “Travelers amid Mountains and Streams” doesn’t offer temperatures as we are accustom to in colored pictures, but it’s scale and shapes conjure feelings of respect for nature, as well as the mystery it contains. However, it’s ultimately impossible to determine exactly what emotions are brought forth by one painting, as it varies from person to person.

After looking at the two landscapes, “The Haywain” by John Constable and “Travelers Amid Mountains and Streams” by Fan Kuan, one sees some basic similarities and a large variety of stylistic variances. We see that with varying cultures and time periods the projection of landscapes is very different. The shapes and methods used to create depth and perspective are completely different. And ultimately it’s amazing how two different methods of painting, on two completely different mediums have both been brought to such a great level of perfection.