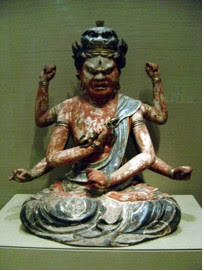 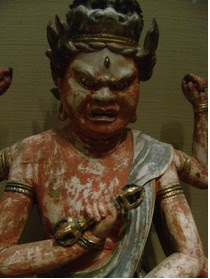 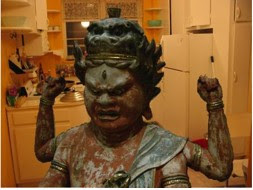 After I almost went through the long semester, which I took the impressive Asian Art History class, I was more concerned about Asian culture, in which I grew up.When I was little, I was brought to a Buddhist temple near the place where I grew up in Japan, I was told to clap my hands twice in front of a money box and a magnificently solemn sculpture, which my mom told me to call “Bosatsu-sama. (“bosatsu” is bodhisattva and “sama” is honorific in Japanese.) So, as long as I can remember, this God of Buddhism has always stood there in my mind and I have never doubted its existence, unlike those Greek deities in legend. After I took this Asian Art History class, my ideas about Buddhism have only become stronger reinforced; God exists.

When I visited the Asian Art Museum in San Francisco, I saw a sculpture, which I felt unfamiliar with. The sculpture of God in Buddhism in my idea had always expressed the calmness and peaces on the whole surface. However, this half size of human being sculpture, the Esoteric Buddhist King of Ragaraja, in Japanese Aizen Myou-ou, from Kamakura period, seemed expressing rage and fight. The crimson red color spread most of the part of the body reminded me of blood shower from human beings. He has six arms, which seem posing like a body builder, and one of them is holding something like a metal weapon, which looks like a gold dumbbell. And from the time it was made, Kamakura period, when the Japanese soldiers, Bushi, were doing an active part, I judged this sculpture as a deity of fight.

However, in the explanation board, it says this “is popularly known as the god of LOVE”!! I could not trust my eyes. I kept reading. Explanation board says “He symbolizes one of the most fundamental conceptions that human passion is identical with enlightenment.” Is that true? It seems opposite to me. Human passion we generally imagine usually brings human desire and intense feelings. Meanwhile, enlightenment in Buddhism comes along with selflessness and calmness. I kept reading. “He has fire-like red body, six arms, and a scowling lion head adornment, meant to be frightening and awe inspiring. All of these express Myou-ou’s explosive power. One of the six arms of this image still holds a thunderbolt. The five other arms held weapons, such as a bow and arrow, that have been lost.” Did he just lose his weapons by accident? Or he threw away his weapons? In latter case, it may be acceptable that this sculpture is deity of love, but he is still holding one weapon in his hand. How could people call this a god of love?

Then, I closely examined the sculpture again and again. I gazed from several different angles even though he still had a madly face and never looked kind or lovable. However, as I closely looked more and more, suddenly interesting thought came up in my mind; he looks like my mother when she is angry. She had this face expression when I came back home late from hanging out with my friends. She asked me why I did not call or tell her that I would come home late, and told me how much she got worried. That face expression seemed very similar to this sculpture. Then I thought love is not just an expression of affection. Love sometimes is anger. Love is struggling. Or love is fighting.

After all these concerns, it is reasonable that this sculpture, which is totally dissimilar to Venus de Milo, is actually a god of love. As people have admired a person, Buddha, as a god, god is something in real, and something in humanity. We may see a god in a person close to you, someone who saved your life, someone who worries about you, someone who gets mad about you, or someone who loves you. That’s the Buddhism I grew up with. God is always close to us. God definitely exists.
Newer Post Older Post Home